➽ “And no matter how desperate or dire, never pray to the gods that answer after dark.”

The Invisible Life of Addie La Rue is the most enchanting release of 2020. I love a premise that sets up a question, one speculative element that creates a whole story. In V.E. Schwab’s latest adult novel, that question is: what if you were cursed to be forgotten by everyone you ever meet?

In 18th century France, Addie LaRue is forced into a marriage she does not want. Willing to sacrifice anything to avoid a life in captivity, Addie makes a Faustian bargain for her freedom. She is willing to trade her soul for an eternal life living by her own rules, but The Darkness will not agree without a time limit.

➽ “You want an ending,” she says. “Then take my life when I am done with it. You can have my soul when I don’t want it anymore.”

The Darkness is intrigued by her offer, enticed by a new game. He grants her wish to become immortal, but in turn she is cursed to be forgotten by everyone has ever known, or will ever meet again.

One of the most compelling premises I have ever come across, and the story absolutely did not disappoint. The prose is indulgently purple, the similies were plentiful (three to an e-page at times, I counted), but the floweryness of the writing is the perfect fit for the type of story this is. It’s a slow walk along a river, it’s a late evening spent in good company, it’s a reflection on a what-if, but a reflection on ourselves as well. Who are we, without our relation to others? How do you build a meaningful life when it’s almost like you don’t exist? And, in Addie’s own words,

➽ “What is a person, if not the marks they leave behind?” 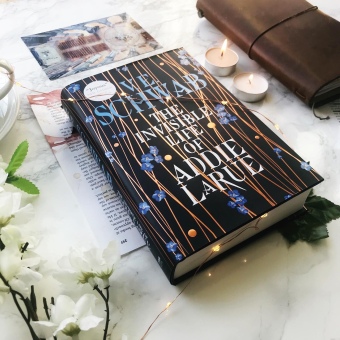 I loved how the story is laid out, jumping back and forth between Addie’s early years struggling with immortality and the consequences of being forgotten, and present day when she meets another special character – Henry, the first person to remember her in three hundred years. As a character, Addie is not exactly overflowing with personality. She is a muted character, but her quietness worked with the quietness of the story, and she shows a lot of quiet strength in her own ways – and that was refreshing to read about. The non-linear set-up really works for the story, as we can learn about Addie’s early pain and troubles, but skip to in and out of her future where she has overcome, learnt, and devised her own manner of making her way in the world. I was really invested the minutia of her life – I wanted to know how she could eat, how she could afford anything, how was she going to solve this problem and the next? But where I was most compelled were when it came to Addie’s relationships.
There are many throughout the novel, and no matter how small, all are poignant. Her biggest relationship is the one she has with the Devil who granted her wish, who shows up every year on their anniversary, to see if she is ready to hand over her soul. The story of a human and the Darkness they make a deal with is nothing new, but in Schwab’s hand it is fresh and peculiar and intimate – and just fantastic to read.

➽ “Do not mistake this—any of it—for kindness, Adeline.” His eyes go bright with mischief. “I simply want to be the one who breaks you.”

Though I loved their dynamic, the game they played for Addie’s soul, their whole relationship, really … I feel like it could have been structured better. We do get to a point in the novel where the Devil is just showing up in each consecutive chapter, dancing the same dance, throwing her the same lines and arrogance, not really progressing the story or their relationship in a meaningful way. This did slightly impact my enjoyment of that particular subplot, just because the repetition got so tedious.
Another area I didn’t connect with so much was Henry’s storyline. I really liked what he represented, his struggles with mental health and addiction were very well portrayed. But as a character, he didn’t grab me. He, much like Addie, was a quiet character, but in Henry’s case he needed to be a bit louder because I just could not hear him – connect with him. We got a lot of backstory on Henry (and his friend circle which, to be honest, didn’t bring anything to the table – they were just annoying), and for me, it just turned into a bit of a skip-fest. I kind of wish we had just stuck with Addie and her POV for the whole book; that said, the Henry chapters definitely had their moments, so that’s not a hill I’ll be dying on!

Though I may have stumbled over a few parts in this story, my whole reading experience was nevertheless and absolute delight from start to finish. This is one story that will never be forgotten, even if its title character is cursed to be. It is lyrical and melodic, genius in its own quiet way, and will stir up thoughts inside anyone who opens its pages. A real gem of a novel, not one to miss out on.

5 AMAZING BOOKS TO HELP YOU TEACH YOUR CHILD ABOUT RACE AND...