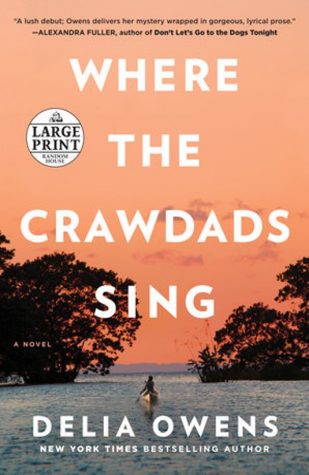 “Months passed, winter easing gently into place, as southern winters do. The sun, warm as a blanket, wrapped Kya’s shoulders, coaxing her deeper into the marsh. Sometimes she heard night-sounds she didn’t know or jumped from lightning too close, but whenever she stumbled, it was the land that caught her. Until at last, at some unclaimed moment, the heart-pain seeped away like water into sand. Still there, but deep. Kya laid her hand upon the breathing, wet earth, and the marsh became her mother.”

I was completely entranced by this story, in ways I never expected to be. It was memorable, both in character and in content, and though it was only a story about one little girl in one small part of the world, it swept me off my feet as if it were a saga. It’s books like these that prove stories do not to be epic in scope to pack a punch. You can still fall in love with a character and their journey, and that’s exactly what I did. If you’re a fan of utterly moving character-driven dramas a little bit à la Celeste Ng, Where the Crawdads Sing may be the book for you.

At the tender age of six, Kya Clark watches as her mother walks away from her family. One by one, the rest of the Clark family follows in her footsteps, elder siblings walking out of Kya’s life one day at a time. They leave Kya alone in a run-down shack with her father who negligent at best and abusive at worst. Kya is left to raise herself in the deep marshes of Barkley Cove, North Carolina, alone and unloved. What follows is a story of survival, of loneliness and human connection, the story of an innocent girl who did not deserve such a start in life.

“Alone for hours, by the light of the lantern, Kya read how plants and animals change over time to adjust to the ever-shifting earth; how some cells divide and specialize into lungs or hearts, while others remain uncommitted as stem cells in case they’re needed later. Birds sing mostly at dawn because the cool, moist air of morning carries their songs and their meanings much farther. All her life, she’d seen these marvels at eye level, so nature’s ways came easily to her.
Within all the worlds of biology, she searched for an explanation of why a mother would leave her offspring.”

I did not expect to love a story set in the depths of North Carolina marshland. The ‘deep south’ has never been an appealing setting for me, and still isn’t if I’m honest, but Barkley Cove seems to be the exception. These marshes are written as their own character, full of life and personality. They are as much of a part of the story as Kya is, and together they make a heart-melting duo.
Kya herself is one of those ‘good and pure’ protagonists. I wouldn’t say she’s fraught with complexity, she’s a very innocent and naive child entangled in a survival story, and that just makes her insanely likeable. She’s a kid surviving in the wilderness on her own, you can imagine what a satisfying read that is. I felt myself cheer when she prevailed, I felt my heart sink when she didn’t, and goddamn it I cried when she cried – and I do not let the tears fall for just any book, I can tell you.

At the crux of her story, though, is a murder mystery. Not a big one, it teases its way into the plot bit-by-bit. This is where the story fell short for me. I didn’t mind this crime-y subplot, but in the end I just felt like it could have been executed better. I found myself wishing it was either more ingrained in the story or just left out entirely, but that was really my own qualm about the book.

In all, a massively engaging read, and well-deserving of the accolades it has already received. I’d recommend picking this up if you are a fan of Little Fires Everywhere or The Great Alone, or if you’re looking for someone who inspires you to keep working hard, no matter the circumstances, and prevail when everything else seems against you.