I’m going to be honest, this series was a chore to get through. The series’ 39 episodes took me more than a year to watch because I genuinely couldn’t be bothered. I know it was the 60’s, and I do try my best to appreciate and review the show for what it is, but it’s hard to find the motivation to sit through a story arc when the production quality is just so bad. 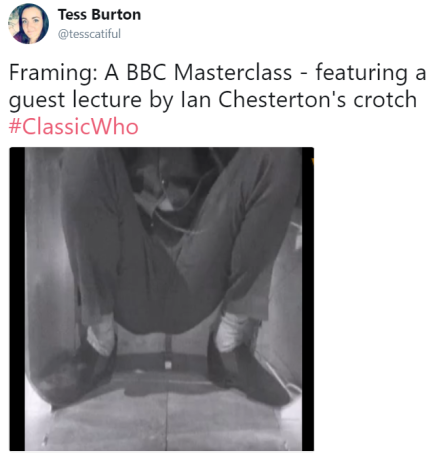 Nevertheless, I eventually climbed the Everest that was series 2, and I did actually find a lot of things to like about the early installments.

Oh, how I love Hartnell. I didn’t like him at the beginning of series 1 but I grew to love him like family. He’s such a sassy granddad, and really the kind of guy you’d appreciate working in an office with, as long as he was on your good side and all. If you were his work buddy, every day would be just a little bit more fun with him to have a bitch with, and you know if anyone pissed you off then Harnell would sarcasm their ass out of that lunch room.

Steven: “Well what does this do?”
Doctor: “That is the dematerialising control. That over yonder is the horizontal hold. Up there is the scanner, those are the doors, that is a chair with a panda on it. Sheer poetry, my boy. Now please stop bothering me.”

I will always love how fiercely protective he is of his companions. He loves them all dearly, has some top-notch bants with ’em, and acts like a dick to everyone else in the universe, it’s beautiful. I think this scene between the Doctor and Ian really sums up what he’s like: instantly distrusting and therefore rude to anyone he doesn’t know, but the minute you’re in his good books he loves you. Just look how he keeps touching Ian’s arm in that scene! It’s so grandfatherly and affectionate!

Hartnell’s not the epic Doctor we’re used to in the modern series; he’s often outwitted by his companions and he doesn’t always think up the solutions to whatever problem they’re in. But he’s got character; he’s sassy and lovely and he acts so superior to everyone even when his companions are the ones thinking up shit or saving the day!

Ian: “Yes, it’s got eyes. I saw them. Green. Used to daylight. Must have come in from the outside.”
Doctor: “Oh. Very good, yes. Very intelligent reasoning. So good I might have said the same thing myself.”

He’s adorable and I double-heart him. ❤❤ He’s the Doctor, and I know he’s going to go through a shit-ton of character growth and change (quite literally), but right now I don’t want anything other than Hartnell in my life, sassing up the place in this elderly way, caring for the people he loves and not finding a fuck to give about anyone else.

“You know, I am so constantly outwitting the opposition, I tend to forget the delights and satisfaction of the gentle art of fisticuffs.”

Hartnell was a dick to abandon her to pursue a romantic future with a random guy she just met, but whatever the cause I was so glad to see the back of Susan Foreman. She leaves right at the beginning, so she’s barely part of the season, and is replaced by the lovely Vicki who is from the future. Vicki is quite a direct replacement, exhibiting the same ‘young, intelligent woman’ stereotypes that Susan had, but Vicki achieves this all while actually remaining likable. She’s plucky, happy, amusing in some parts and far more stomach-able than her predecessor, but that’s really all there is to her personality.

I’ve always been more interested in Ian and Barbara, and it was so sad to say goodbye to them near the end of the series, but they had a good run. They had their moments during the series; some comedy, some bants, really saving the day on a couple of occasions, and it was good to see them exit the show on a really positive note.

And replacing them: Steven.

Oh, wipe that look off your face, you git.

Let’s be fair here: Steven came in right at the very end and hasn’t had a chance to shine yet. That being said, he’s annoying as hell.

No one believes their eyes the first time they set foot on the TARDIS, but Steven is just such a dick about his skepticism. It’s irritating, and I stand fully behind Harnell every time he sasses Steven for being a douche. But it looks like Vicki’s got the hots for him, despite the fact that she clearly also thinks he’s bloody arrogant. I can’t really judge him too much at the moment, but I’ll be starting series 3 with my narrowed eyes in his direction.

There were absolutely no enemies of any particular note or relevance in this season, so I’m just going to save myself the trouble and not even mention them (the Daleks are still utterly un-terrifying, if you needed to know). So instead let’s jump straight into the production. What was it like?

Yep, some episodes made me want to sonic screwdriver my own face off. I was optimistic at first; it appeared the BBC had blown their wad on the first couple of story arcs, really invested in some decent props and a nice set or two. Didn’t last though, did it? Considering that the best stories were only somewhat enjoyable and the worst stories were actually physically painful, it’s hard to say which episodes I recommend. None of the stories are cut from the same cloth from which Moffat and Davies have weaved their modern masterpieces; they aren’t exciting, they amble along quite slowly, and if you’re lucky on a good day you’ll get a funny line or two from Harnell. And that’s all I can really judge this season on: how the characters fared in each story arc. Because story-wise, there were only a couple of episodes that I didn’t fall asleep to. I wish I had more positive things to say about the production but it is what it is: I had little to no interest in what was going on, and no amount of trying to ‘appreciate the show for what it is‘ can help me in that respect.

All in all: meh. Series 2 was an improvement over series 1 just for the pure fact that Susan Foreman fucked off. I’m not expecting it to get a lot better anytime soon, but at least I like the Doctor and Vicki, so I’m happy to keep watching them. I don’t have the highest of hopes for series 3, but I shall continue to remind myself to try and appreciate it for what it is. But it’s an uphill struggle, guys, it really is.

Review: A Ballad of Songbirds and Snakes by Suzanne&nbsp...