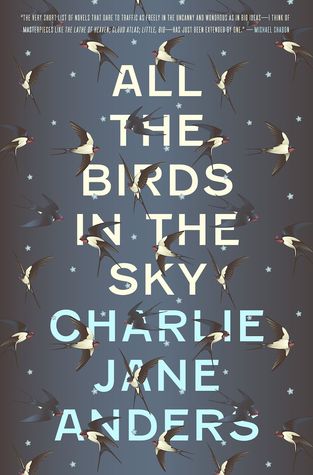 This is a story about the end of the world. Except not really.
It’s a love story set in a not-so-distant future. Except not really.
It’s a story about a clever little boy with a two-second time machine and a young witch who can talk to animals. But it’s so much more than that. It wasn’t what I had expected, but that’s mainly because I didn’t know what to expect at all. All I know is that I stumbled upon the blurb on Goodreads six months ago and immediately went

Let’s start at the beginning.

Patricia is a clever little girl. She’s cool, she likes nature, she tries to save an injured bird from her psychotic sister. She is surprised when that bird starts talking to her. It’s new. The sparrow takes her to the Parliament of Birds where they ask her the Endless Question and change her life forever.

Lets start at another beginning.

Laurence (not Larry, damn it) is a clever little boy. He likes science and not much else. He spends a lot of time alone in his room downloading prototypes off the internet and creating cool gadgets. One day he skips school to attend a rocket launch and meets the important scientists working to save the world. They change his life forever.

One day, Laurence and Patricia meet and become the most unlikely of friends.

“She still wasn’t sure where she stood with Laurence. They had hung out, furtively, a few times since their lunch in the library. But Patricia felt like both she and Laurence knew, in the deepest crevices of their hearts, that they would each ditch each other in a second, if they had a chance to belong, really belong, with a group of others like themselves.”

I really loved Laurence and Patricia as kids. Laurence had ever such a slight arrogance to him, but a pained arrogance. He was a character I could really see the good side in. Patricia was adorable and she had her head on the right way. Brave and smart and, like Laurence, conflicted.
Both of them suffered from Shitty Parent Syndrome, which is a trope I absolutely adore when done well. Their parents are utter dicks, and I really felt it. I was personally offended by their neglect, their condescension, their goddamn stupidity. It was easy to see how, to them, they thought they were just disciplining unruly children; they had to. But of course the reader knows the whole story; the reader can see how misunderstood Patricia and Laurence were, how fucking blind the parents were being, and it made me so mad. I loved it. Just like I loved Laurence and Patricia’s awkward friendship.

The first third of the book, for me, was the best. I enjoyed the two main characters as children, their growing aptitudes in their respective areas of interest, the cute and funny interactions between them. I enjoyed the hints of plot too:  feeling like there was a massive build-up yet having no idea what that build-up could be. But after a while the story progressed and took on a different tone as the characters grew older. It felt like it was three different genres of book in one, the mid-section being a bit more of a modern urban romance: young, city-working professionals looking for love. Kind of like a better-written Danielle Steel book, but with some magic and science thrown into the mix. Of course the magicky parts interested me more, and alleviated some of the boredom I sadly felt, but this section did lose me a bit nonetheless.
The end of the story, apocalypse-lite, didn’t really win me back. There wasn’t enough apocalyptic/survivalist shizzle going on for me. Patricia lost a bit of her charm. All the little plot tangents and interesting factors, the secrets that needed to be revealed, ended up being a bit disappointing, and the end anti-climactic. I really thought all the loose ends were going to be tied up into a really neat little bow, one I could say was really expertly crafted and really awesome to look at. In the end….meh?

I still really enjoyed the book. It was definitely unique, unlike anything I’ve ever read, really hard for me to compare it to anything. I’d say the first half could be likened to The Ocean at the End of the Lane, drawing on the same themes of magical realism, odd kids with a distinct friendship, and shitty, shitty authority figures.
The second half is really quite unique, I can’t really compare it to anything. Except to the first half, where it does honestly pale in comparison.

Still a four-star read though, with characters I really cared about, a striking writing style, bit of humour, bit of romance and always just a tad of magic to keep me happy. Plus there truly some moments that just made me stop and think about life for a moment. It was powerful.

“Society is the choice between freedom on someone else’s terms and slavery on yours.”

Do me a favour and give this one a read. It’s different, it’s good, it’s ambitious in its own way and it kept me thinking about it long after I turned the final pages.