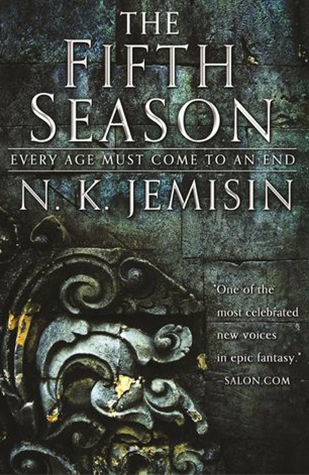 “According to legend, Father Earth did not originally hate life.

In fact, as the lorists tell it, once upon a time Earth did everything he could to facilitate the strange emergence of life on his surface. He crafted even, predictable seasons; kept changes of wind and wave and temperature slow enough that every living being could adapt, evolve; summoned waters that purified themselves, skies that always cleared after a storm. He id not create life – that was happenstance – but he was pleased and fascinated by it, and proud to nurture such strange wild beauty upon his surface.
Then people began to do horrible things to Father Earth. They poisoned waters beyond even his ability to cleanse, and killed much of the other life that lived on his surface. They drilled through the crust of his skin, past the blood of his mantle to get at the sweet marrow of his bones. And at the height of human hubris and might, it was the orogenes who did something that even Earth could not forgive: They destroyed his only child.”

In a world where the end of days isn’t just a threat but a guarantee, where the latest apocalypse is triggered by a powerful madman looking for revenge and the arcane obelisks that float above the Earth are beginning to shift, the powerful and heartbreaking story of Essun unfolds.

And it was just … brilliant.

I don’t think I have ever seen such incredible world-building. Ever. This book was gorgeously descriptive (without being overly purple), marvellously creative and bloody well-structured. Jemisin took care to avoid the old info-dumping and made sure to spread the world-building all throughout the book, including technical elements as well as diving into neurology, geology and tectonic science. It must have taken an incredible amount of work, and it shows. And the character development – oh my word.

In this world, you are Essun: a forty-two-year-old woman who comes home to find her son dead on the floor, brutally murdered by her husband. Understandably, you just shut down. All you can do is sit with your son’s body, covering him with a quilt so her doesn’t get cold and making sure not to cover his face. He’s scared of the dark.
You barely do anything else until the community’s doctor checks in on you and in the wake of the tragedy he takes you into his home, cleans you up and lets you rest, until life returns to you and you set off in search of Jija, your husband, to kill him and rescue your kidnapped daughter from him.

“Jija’s boots can be traded, since they’re in good condition. He’ll never wear them again, because soon you will find him, and then you will end him.”

The story is told through multiple POVs, a technique that I’m not ordinarily a fan of but I cannot deny how well N. K. Jemisin pulled it off. It not only works, but tells an infinitely better story because of it. An unusual twist is that Essun’s perspective is the only one narrated in second person, which was a notable choice. But it’s done for a reason, not least to bring you incredibly close to Essun from the very beginning. I felt her pain over the loss of her son and everything that went on in her head over it. It was incredibly well-written, and I don’t think it would have been quite as powerful if it hadn’t been told in second person.

Our other two narrators are Syenite and Damaya, who are brilliant it has to be said, but I’d prefer to leave their stories for you to discover. And at the end of the day, it really is all about Essun. Who I love tremendously. She’s one of those rare characters in novels who feel like a real person. She’s not a pumped up heroine with a shit-ton of personality, she’s not quirky or gimmicky, witty or particularly pretty or talented. She’s a strong woman, she’s been through hell and she’s hurting. She makes mistakes, she doesn’t know what she wants or even what to do with herself a lot of the time. But she’s so incredibly relatable and loveable.

And did I mention she’s powerful? True, a hint of a ‘special‘ powerful heroine cropped up near the end, but for the most part it’s understated as she’s still growing and learning about her orogene power. She, and other orogenes, have the power to harness the Earth’s energy and weaponize it. It’s a power that I wasn’t sure about at first, but as the novel progressed it proved to be quite interesting and, dare I say it, cool.

I loved all of the different uses for orogeny. I loved the fictional history and lore. I fangirled over the tiny details and character interaction. I felt the heartbreak, I feared the Guardians, I respected the diversity and representation. I loved Essun, I adored Innon, and there are definitely some supporting characters I’d like to see more of in the sequels. I loved the stone eaters and the pirates (yes, pirates!) and I loved loved loved the plot. It was well-paced, well thought-out and intriguing. There were twists and turns, some you see coming and some that hit you in the chest like a freight train. Just when you thought you’d read the most clever plot twist, another comes round the corner. Just when you’d got through the most heartbreaking part of the story, that’s right, it reels you back in for another round.

I wish I could adequately spell out for you how fabulous The Fifth Season is, but I went into this knowing hardly anything about the story and that’s how I think it should be. If you’re an adult /new adult who likes fantasy, pick this up immediately. Don’t be put off by the multiple POVs, even if they’re not usually your thing. Don’t be deterred by the quite large amount of jargon thrown at you from page one. It’ll all become clearer in the end, it’s meant to be understood as you go through it. So take your time, take it slowly and savour it, because this could well be a book you don’t ever want to end.