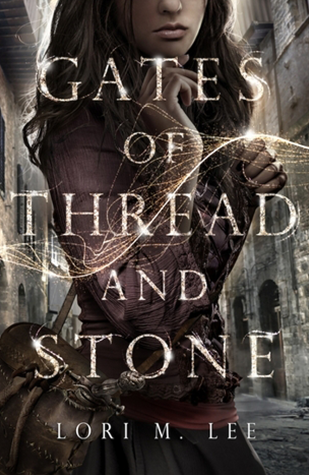 I’ve just got to go ahead and rate this one five stars. It just hooked me. It was so completely my kind of story. I don’t even care that I had problems with it. I don’t care that my “rules of book enjoyment” are probably looking a little bit inconsistent these days. Shatter Me recently taught me that I can love a book without it having everything I once thought I needed in a novel. I can envelop myself in the pure enjoyment of something, I can bend over and let it make me its bitch, all for one element that I just get. And for this one, it was one pretty big element: the story itself. And it was epic.

FYI, this is the International Hand Gesture of “Epic” (patent-pending). It will be a thing. Unless it means something dodgy in sign language. Which it probably does.

Following 17-year-old Kai, the story takes place in the dystopian fantasy world of Ninurta, where the privileged few live in the White Court and the rest live in squalor in the Labyrinth: a vast network of freight containers and stairwells that they call home. With no memories of her childhood, Kai only has her brother Reev to depend on, and though they love each other they both keep secrets from each other. Kai, for example, can manipulate the very threads of time. And then Reev goes missing and plot stuff happens. I shit you not, it is good, but Gates of Thread and Stone did threaten disappointment. And by that I mean that I had built it up in my head waiting for the release for so long, and I also listened to my preconceptions a little too much. So my fault then, really.

First off, the title itself follows the Daughter of Smoke and Bone naming trend. There’s a few of them rocking around right now: Prisoner of Night and Fog, Of Scars and Stardust, House of Sand and Secrets to name a few. I don’t know if Laini Taylor truly started the trend, but it was about the time her books got popular that we started seeing more of these formulaic titles.
It’s not a bad thing per se, but it annoys me. Intent or not, it feels copycatish and it annoys me. You know what else annoys me? My own prejudice for self-published novels. I never used to be guilty of it; one of the first self-pubbed novels I ever read was Angelfall and that was a fecking masterpiece. But sadly over time and exposure I have succumbed to slight book snobbery, but wow did Lori M. Lee put me in my place.

I was impressed from the get go. The plot wastes no time in appearing, and I was blown away with the world-building. The filthy slums of the Labyrinth were excellently described, and it’s been a while since I’ve read a book that properly transported me to its world. I couldn’t help but imagine the gritty, back streets of 20th century London, the walls caked in soot and the cobbles swimming in sewage scum. Just like a scene out of Oliver! only maybe with less haphazard barrels and corsets and with more jeans and a hint of possible technology. But with all of that poverty. Yes to that poverty.

It’s a fabulously dark start (and I hope the darkness grows thicker in books to come) that I was perfectly content exploring for a while longer and then we’re rushed on an adventure through different parts of this fantasy land: desert waste-land home to magically evolved gargoyles and a secret magical castle that some may picture as Hogwarts. I, on the other hand, got the image of Malificent’s castle stuck in my head.

And now you do to.

I would like to point out that the fortress in question really doesn’t look anything like Malificent’s castle. Though still eerie, it contains significantly more furniture and lamps.

Once the book had sold itself to me on its world-building, the characters, plot and subplots weren’t very far behind. For most of the novel I had a solid 4-star rating in mind. Why only four? Well, this is where a few of my own personal preferences come in.

The characters took a while to grow on me and I don’t think fully got a chance to live and breathe. They all lacked something that really made them pop. I’m also very picky when it comes to romantic subplots. As in, I do not like them. If they’re done well: by all means. But more often than not they just piss me off, which Gates of Thread and Stone did at some points. It felt like too much time was wasted with longing and over thinking and dancing around your fucking emotions. But then again I’ve never been a fan of that kind of love story where two characters spend 35 fucking episodes of an early 2000’s Taiwanese drama doing nothing but bat their eyelids at each other until they finally give in to their feelings ten minutes before the end of the goddamn season. Yes, that may have been some pent-up aggression over the TV drama It Started with a Kiss. The point being: if you’re going to give me a love story, give me one where they get together halfway through and then have to fight for their relationship.

That being said, I did end up quite liking the love story.

It brought on the feels, and so did the story between Kai and Reev. Family and friendship stuff just tugs at the old heartstrings something chronic.

So that brings me to the plot, the pièce de résistance, and yes you know shit just got real now that I’m using my French. Sure, it felt formulaic at times, so I continued with the idea of a 4-star rating. Sure, it did get a little trope-tastic: there’s the young abandoned child, missing parents, memory loss trope. There’s the plot will involve some physical combat from hereon out so let’s get you some training trope. And the ever-loving love-interest just characterised enough to compliment the MC trope. Still, with a little bit more oomph he could have made the book-boyfriend list. He really could.

But after the first big reveal, the little details stopped mattering as much and it just went up and up and up. By the end I was astounded at the intricacy, how it was all so clever and different and satisfying. Due to the formula, there was a hint of predictability, but there was a whole bunch of shit I never saw coming. And no plot holes. God I love that shit.

Gates of Thread and Stone is truly a quality read. I’d recommend it for anyone who loves a fairly dark and clever YA read. Someone who wants an original concept. Someone who maybe read The Winner’s Curse earlier this year and wants the same level of world-building or similar kind of romance. With a much better plot, though. GOD, ALL OF THAT PLOT.