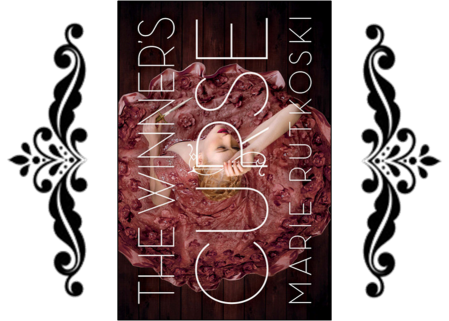 I’ll admit – sometimes I DNF a book too easily. After a lifetime of always finishing a book out of sheer pride, I finally recently realized that life is too short to be reading terrible books so I’ve been engaging in the art of DNF (Did Not Finish). And, yes, because I’m quite new to this sometimes I give up a bit too soon.

Which is what very nearly happened with The Winner’s Curse. If I hadn’t been so excited for this release, if I hadn’t heard so many rave reviews from reviewers I respect, I would have given up on this book. The first third of the book is meaningless and dull. I did not yet care for the characters and was seriously wondering what the hype was about. On top of that the ARC I got from NetGalley was so poorly formatted thathalfofthesentenceshadlosttheirspacessoitalllookedlikethis.

So I’m writing this review primarily for anyone considering DNFing The Winner’s Curse; I’m ever so glad I didn’t, and maybe you’ll be glad not to as well…

This book ended up being fabulous. After a slow and rather dull start, the book completely picks itself up, brushes itself off and says “you know what, imma bring it”.

I can’t say scene-setting is Marie Rutkoski’s strong point. Her world building is minimal at the start, which is a risky choice given that the reader doesn’t really get a good idea of the country and culture the book is set in for quite a while. But Rutkoski actually takes world-building fairly literally, and chucks on little bricks on information one at a time so that by the end of the book we’ve got a very decent idea of what life in the kingdom is like, and we’ve avoided infodumping! Massive bonus right there.

Similarly, the main characters aren’t very well portrayed in the beginning. Kestrel (ugh, that name) sort of meanders her way through the first third of the novel, not really making her presence seem too important. She’s set up to be the pampered daughter of a rich war general who is being forced into either marriage or the military. But all she wants to do is flounder through life doing…well, she doesn’t really know what she wants to do. She likes piano, but that’s the extent of it really.
Because Kestrel is indescicive and floundery (*ahem* totally a word) and in essence not quite there, she starts off being pretty damn annoying actually. As does el poco love interest slave-boy Arin.

Why? Because I don’t find arrogance attractive. Sure, if you’ve got a bit of a cocky charm about you then that can be quite delightful. But Arin really takes it too far. You’ve read the blurb, Arin has an agenda. But his massive ego has serious potential to blow his plan to hell, and that’s just daft.

Luckily both characters got a lot better. Arin shows a more sensitive side and, yes, becomes a bit of a Gary Stu but I did end up quite liking it. Kestrel grows some balls and proves that she is intelligent, she is brave, and she does not take any shit.

And boy did I get into the romance. I seriously ship it.

The plot picks up in no time, the characters grow into their own and I was amazed by how attached I became to them. I can’t wait for the book to come out in the UK so I can read it all over again.