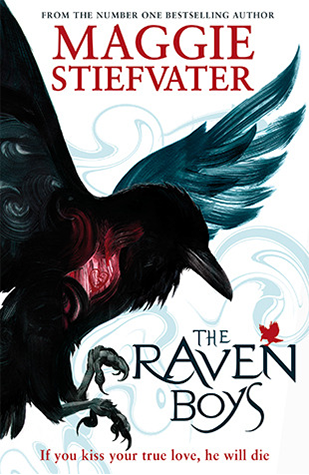 When I finished this book I had such mixed feelings about it. But after actually thinking about it for half a minute, I realized my feelings were actually pretty clear: I would have loved this book if it weren’t for my pesky high standards, more specifically: I like to feel a bit of a connection to the characters!It’s so annoying because this book really did have everything else I was looking for.  It’s about a young girl called Blue (another one of those oh-so-annoyingly-quirky YA names) who comes from a psychic family.  She’s the only one who doesn’t have the gift, however she has grown up believing in her mother’s prophecy that one day she will kiss her true love…and he will die.  The story follows Blue as she meets four boys and joins them on a quest to find a lost ancient Welsh King who is buried somewhere along the Virginia ley line.

Already an interesting premice right? It is actually a very solid plot with a very good balance between action and characterisation. I really did enjoy the magic system in this though it’s nothing original as it’s all to do with psychics, tarot and seeing some good ol’ dead people à la Hayley Joel Osment (only way less creepy).  Though the book wasn’t exactly overflowing with magic, I do have an interest in mediums and clairvoyants and I like how it was portrayed in The Raven Boys.
I also have to applaud this book for its humour!  Oh God it is so refreshing to read something funny for a change!  I have always said that there is always room for humour, no matter what genre you’re writing.  Even if it’s a ridiculously serious book, a small joke or a self-depricating sarcastic snipe will always earn you some extra respect from me.  But I do realize that not everyone can bring the funnies, which is why I have to give Maggie Stiefvater credit here.  The Raven Boys is funny all the way through; it’s not exactly laugh-out-loud funny, it’s the subtle, dry wit kind of funny that I adore (and that much is probably apparent as it’s the kind I tend to use in my own writing).
So yes, points to Stiefvater for the funnies. Humour in books makes me do this:

Unfortunately my indifference towards the cast of characters was too great.  I just really. didn’t. give. a. shit.  And you know why? Bloody alternating POVs each and every damn chapter.  I have never liked that shit.  I have made exceptions for books that don’t pull the stunt too often, like having half the book from one POV and the rest from another, I’m a lot more comfortable with that.  But switching it up every few pages is not cool.  Furthermore, Stiefvater was switching through multiple characters and it just didn’t work.
I think I would have quite liked Blue if the book was just following her.  She was a bit average, but she showed on a few occasions that she didn’t take any shit and I warmed to her.  If we could have spent more time with her, allowing her to develop fully in our minds, she could have been fleshed out into a pretty decent protagonist.  Instead we have to spend a lot more time with the other characters who I couldn’t give a shit about.  Gansey’s supposed to be our second protagonist (and potential love interest) but he’s completely blah.  I really can’t describe him otherwise; nothing fits his character more than the word blah.  He was just there.  In all of his second-protagonist glory.  And he meant nothing.  The other characters are also pretty lame; your typical recycled archetypes that I didn’t really care for.  I appreciated that they had a bit more of a personality than Blue and Gansey, as is usually the way with secondary characters, but I couldn’t care less about them.  I only really liked Noah, but he hardly gets any page-time unfortunately.

The thing is, the POVs and the shitagonists were my only problems with the book.  The magic system, the plot, the humour, the writing, that was all fine.  Excellent, even.  But despite the good parts I still found myself speed-reading and just not caring.  The good parts just weren’t quite redeeming enough for me.

Nevertheless I would still recommend it.  The POV changes and character personalities won’t irritate everybody; heck some people even like that shit!  So on the basis of the magic system, plot pacing and *yay!* humour, I’d say to go give it a shot.  I’m off to see if the sequel redeems the series…